Earlier this year, the IEC released some mobile apps, and an API with full access to election results as they become available. The API has some problems (notably, it requires a username and password which you have to *cough* get from somewhere) but it feels like a step in the right direction. At the moment there isn't any way to get results for all voting districts - rather, they have be requested per district. I used Code4SA's 'IEC API API' and a list of voting districts found in this SQL dump to pull down the results, and I'm sharing the data in case anyone is interested.

This zip file contains csv files of results by party (number of votes and percentage of total) for each voting district, as well as data on voter turnout, special votes, and total registered voters.

This shapefile contains the voting districts. I converted it from the SQL dump, use at your own risk.

Getting the data took a while and involved some acrobatics, which I'll post about when I get a chance. I made a voter turnout map as a quick attempt to do something with it, and I think it turned out pretty well! Mapbox is awesome. 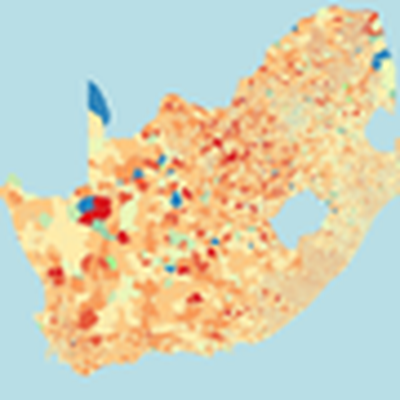