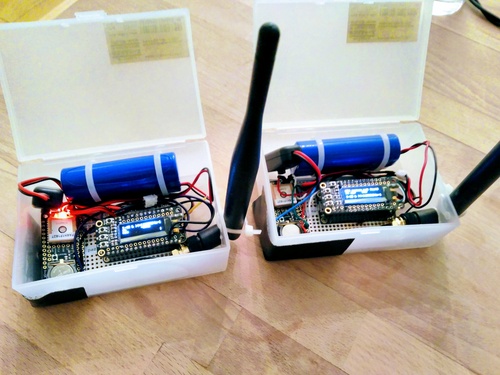 A pair of homebrew trackers for off-the-grid location sharing, using Adafruit's Feather boards. Hardware mostly me, software mostly Drew. Built (in a rush) for Burning Man 2016, where the perfectly circular city layout makes it possible to accurately convert GPS co-ordinates to a street address (e.g. 4.15 & J-25m). For Afrikaburn, which does not use a perfectly circular layout due to terrain, we used a radial system, choosing a centre point and origin bearing and displaying a bearing as clock time and distance in metres (e.g. 9.45 + 600m).